This is a brief explanation about RTP, a protocol which helps the transmission of multimedia data through IP. If you are interested in the protocol that gives you the opportunity to exploit all the possibilites in the field of data transmission, read through the sections that contain information about the elements of the protocol or where it is mainly used. You can also find a video on our page.

RTP (Real-time Transport Protocol) is a standardised packet format that transmits both video and audio (multimedia) data via the Internet and you can see a picture about it in Figure 1.

The structure/packet of Real-time Transport Protocol consists of 3 different headers: UDP header, an IP header and an RTP header. It has an UDP header because an RTP packet is an UDP packet and has RTP header since the packet is transmitted through RTP. An RTP packet is delivered to the RTP payload segment.

In Figure 2 you can see the components of RTP protocol. 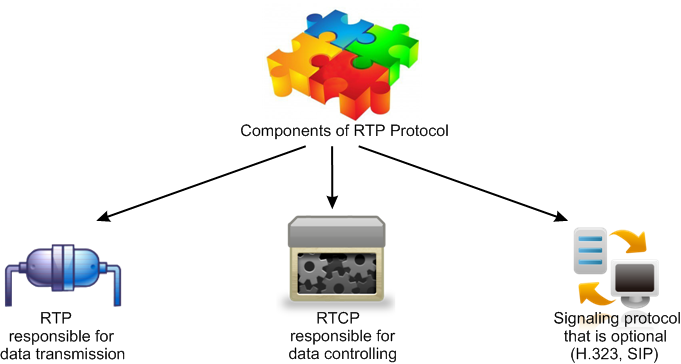 RTP is used by network and transfer protocols. The protocol transmits real-time multimedia data. That is why RTP is a widely used tool in communication and entertainment systems for phoning, for video conferences and for push-to-talk features. This is the reason why Real-time Transport Protocol is a key factor in VoIP technology.

Components of the RTP protocol Profile

The Real-time Transfer Protocol supports different kinds of audio and video formats, like MPEG or MJPEG but you can add more formats to RTP. The Profile describes the codecs that convert the payload data.

The Real-time Transport Protocol is for transporting (multimedia) data to the end points of communication with real-time attributes. The protocol possesses functionalities such as jitter compensation, detection of out of sequence arrival in data. It supports multimedia streaming that can tolerate packet loss.